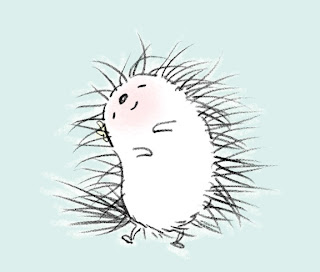 Hugs from Pearl makes Betsy Bird's list of magnificent picture books of 2011. A big hug and thank you for Betsy!
Posted by Paul Schmid at 8:58 AM 2 comments:

out of the box 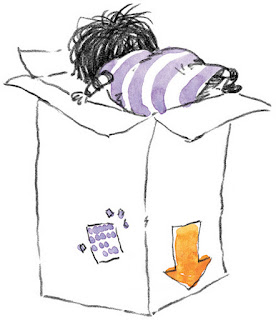 A couple of nice new reviews for PETUNIA GOES WILD, due out late January.

Human behavior requires too much structure: cleanliness, clothing, combing, quiet. Petunia enacts all these banalities, all these “hafta[s],” in an effective spread of c-sounds and frowny-faces. Tiny expressions relay her utter exhaustion with people rules (as well as her joy in running bare-bottomed!). Children will empathize, as they know what it’s like to have a wild impulse crushed for millionth time. Careful! After gobbling breakfast off the floor, growling at neighbors and bathing in a mud puddle, Petunia asks to become the family pet, helpfully holding up a leash and collar. Her parents’ response suffocates an entire page, filling it with fuming type and angry large letters that gradually dwindle in size but not quantity. This visual tune-out of a parental rant works well optically and rings true to young ears, too. Schmid’s suggestive charcoal drawings and purple watercolor accents enjoy lots of white space and clever compositional placement. A mellow orange highlights the animal kingdom (Petunia’s pinned-on tiger tail, stuffed animals and the scrawled words MAIL TO AFRICA on a child-sized box). Her mother’s singing in the kitchen draws Petunia back to her human house, but readers sense Petunia will always remain a little feral.

And from the School Library Journal:

The spunky protagonist of A Pet for Petunia returns with an existential dilemma in this unexpectedly simple yet satisfying tale. Convinced that she should have been born an animal, the precocious preschooler eats her breakfast off the floor, roars at passing strangers, and bathes in mud puddles. Her parents find her request for a cave to live in horrendous and her suggestion that she be their pet drives them to distraction. For Petunia, though, life as a human is just “too… clean. Too careful. Too clothed. Too combed. Too quiet. Too… hafta.” She packages herself into a box labeled “mail to Africa.” The sound of her mother singing in the kitchen causes her misgivings, and she creeps silently back to the kitchen, where milk and cookies are waiting for her. Schmid has crafted a fun, well-paced read-aloud. Though never depicted, Petunia’s parents are aptly realized through their few pages of wordy counter-dialogue. Petunia, on the other hand–with her wild hair and tiger tail pinned to her striped purple dress–is adorably rendered in Schmid’s charismatic charcoal drawings. The art plays a key role in the subtle sense of humor being conveyed, as when the girl peeks around a corner with just her human face and tiger tail on display. With a passionate struggle and simultaneous weakness for the comforts of being a human child, Petunia will charm children and adults alike.–Jayne Damron, Farmington Community Library, MI
Posted by Paul Schmid at 11:22 AM 2 comments: 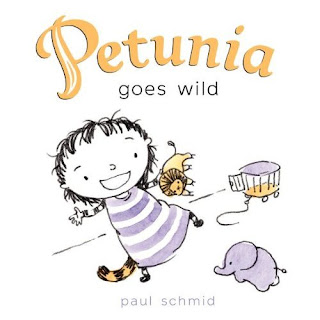 A nice new review from Publishers Weekly for my nice new book out in February, PETUNIA GOES WILD.

In her previous book, Petunia wanted a pet, but now she wants to be one. Donning a tiger tail, she eats her breakfast off the floor, bathes in mud, and insists that her parents find her a cave. Being human is just “Too careful. Too clothed. Too combed. Too quiet.” Her parents don’t understand, but Petunia learns that there are a few perks to being human, after all. Schmid uses naïf crayon lines to convey Petunia’s gentle disobedience and frustration over life’s boundaries. Readers who would rather eat under the table will find an ally in this shrewdly playful heroine.
Posted by Paul Schmid at 9:29 PM No comments: 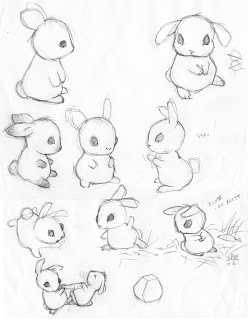 These are my first exploratory sketches developing the styling on a new character. I worked at these on and off at my book signing last weekend. The bunnies have come a long way since then, but I don't have anything to show just yet.
Posted by Paul Schmid at 7:37 AM 1 comment: 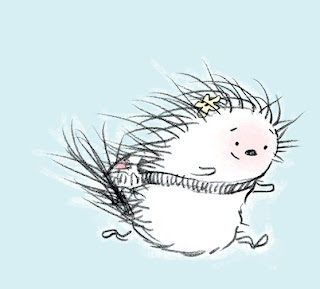 Get on down to Bellevue Art and Frame this Saturday. I will be reading and signing my books from noon to 4pm, so stop by and say hello. --Oh, and buy lots of books too. 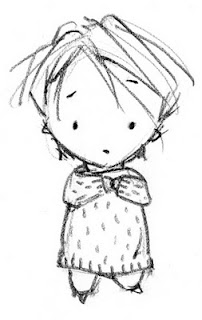 I think I've got it now.
Posted by Paul Schmid at 2:54 PM No comments: