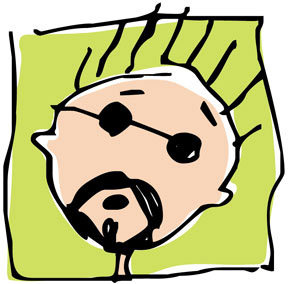 First, today is the launch day for Perfectly Percy! Buy it now! Buy it anywhere! Buy ten or more and you make Paul that much happier!

And then there is an interview of meself on the fabulous blog Seven Impossible Things. Tons of thanks to the perfectly awesome Jules!
Posted by Paul Schmid at 7:32 AM No comments: 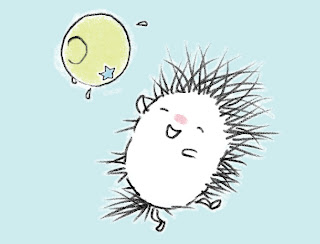 
Percy is a porcupine with a problem. He loves balloons, but when he plays with them, they meet an unfortunate end. Big sister Pearl offers a creative, albeit “not very practical,” solution of sticking marshmallows onto his quills. Determined to find a better way, Percy “thought things all day. He thought thoughts through the night.” Inspiration strikes at breakfast, and the following page shows the prickly fellow sporting a cereal bowl on his head as he happily runs along with his favorite toy. The simple sentences are invitingly conversational in tone (“What’s a little porcupine to do?”). Schmid’s winsome charcoal and pastel illustrations show a charming, roly-poly character with dots for eyes and a tiny dash for a mouth. Percy’s features droop when he looks at his “trezr” chest full of deflated balloons, but a proud smile appears when he comes up with his own idea. A good choice for toddler storytimes.

Here is a fine review from what I've heard are usually grumpy people at Kirkus:

What is an adorable porcupine to do when his passion is for balloons? Is he destined for disappointment, or will some careful thinking lead to the perfect solution? Schmid (Hugs from Pearl, 2011) returns with another sweet tale about the challenges of being a porcupine. Percy loves balloons of all colors and shapes. “But HAPPY little porcupines with balloons are soon SAD little porcupines. / The balloons always go POP!” Percy is determined not to mope or give up. Advice from big sister Pearl is not practical, and his mom is too busy. So Percy must rely upon himself and start thinking. He muses all through the day and into the night. At breakfast the next day, while eating his cereal, he finally has an inspired idea. Young readers will immediately relate to Percy and his dilemma, and they will cheer when he independently comes up with a messy but successful solution. The simple, direct text pairs well with the soft pastel palette of the illustrations. Percy, white with a pink smudge of a nose and a mass of softly penciled wayward quills, appears more cuddly than prickly and is sure to endear. Just right for preschoolers, who will giggle at the gently humorous ending and see a bit of themselves in this utterly charming creature.

And not bad from Publishers Weekly:

Schmid follows Hugs from Pearl (2011), about a porcupine named Pearl, with a companion tale about Pearl’s younger brother, Percy. It’s another story about porcupine problem-solving, as Percy mourns that his quills pop the balloons he loves. Eventually, Percy realizes he can don his cereal bowl (still dripping) like a helmet to protect his fragile balloons, “A perfectly Percy idea.” Schmid conveys Percy’s frustration and elation with a handful of adorable charcoal lines, a few sketched-in items of interest (such as a box of burst balloons labeled “trezr”), and backgrounds in pastel blues, greens, and lavenders. Pacing is slow; it takes Percy eight spreads of thinking—“He thought things all the day. He thought thoughts through the night”—before the solution arrives, a long time in the life of a toddler listener. Nevertheless, Schmid possesses the ability to draw irresistible characters, and his gently unconventional language (“The balloons always go pop! And Percy’s happiness pops with them”) adds a little buoyancy to this straightforward tale.
Posted by Paul Schmid at 9:58 AM No comments: 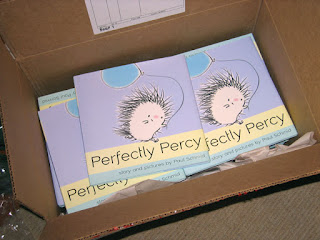 My copies of Perfectly Percy arrived today. That means arrival in stores is not far off, January 29th to be exact. Buy them by the box load yourselves!
Posted by Paul Schmid at 5:23 PM 4 comments: