a very nice summary of Oliver 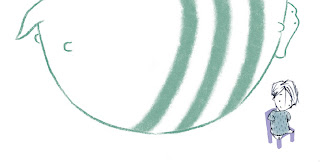 From the Books For Kids blog:

ON THE FIRST DAY OF SCHOOL OLIVER THOUGHT IT BEST TO STOP BY THE SWAMP AND PICK UP AN ALLIGATOR.

When it’s the first day of school and a very small boy feels as if his “brave” isn’t up to facing all the strangeness alone.

With his fantasy guardian at his side, Paul feels more in control of the situation. When a strange woman who looks nothing like his mom asks his name, all he has to say to his alligator are two words:

The lady is gone, and Oliver’s alligator is a little plumper. A girl who tries to talk to him gets the same message.

Oliver begins to feel a lot better, as his magic words make all of the bright colors and commotion in the classroom go away. His pale green and pink alligator is now as roly poly as a beach ball, and all the activity and noise are gone. Oliver pulls up a stool beside his rotund alligator in the empty room and waits for school to start. It’s very quiet.

Then Oliver hears singing and laughter. Somewhere nearby kids are having fun, and it’s all happening inside his alligator. School is on the inside!

It’s time for Oliver to say “Munch Munch!” one more time and put himself into the scene where the action is, in Paul Schmid’s first-day tale, Oliver and his Alligator (Hyperion, 2013).

Schmid earned a 2010 fellowship to study with the late Maurice Sendak, and it shows in this rather quirky tale of dealing with the first day jitters. While Schmid’s storyline shows the Sendakian hand (cf. the personification of Max’s angry feelings as Wild Things, in Where the Wild Things Are,) Schmid’s illustrations, done in soft, grainy pencil lines and pastel colors, are another matter. His “wild thing,” is a fuzzy-ish alligator who seemingly has no mouth or teeth with which to munch anybody, and Schmid’s narration is as non-threatening as his little first-day-of-school hero, who finds a way to face his fear, just as Max tamed his anger. Some children deal with an intimidating situation by daydreaming, mentally removing themselves, and Schmid’s subliminal message of how to put themselves back into life will find its mark.
Posted by Paul Schmid at 8:01 AM No comments: